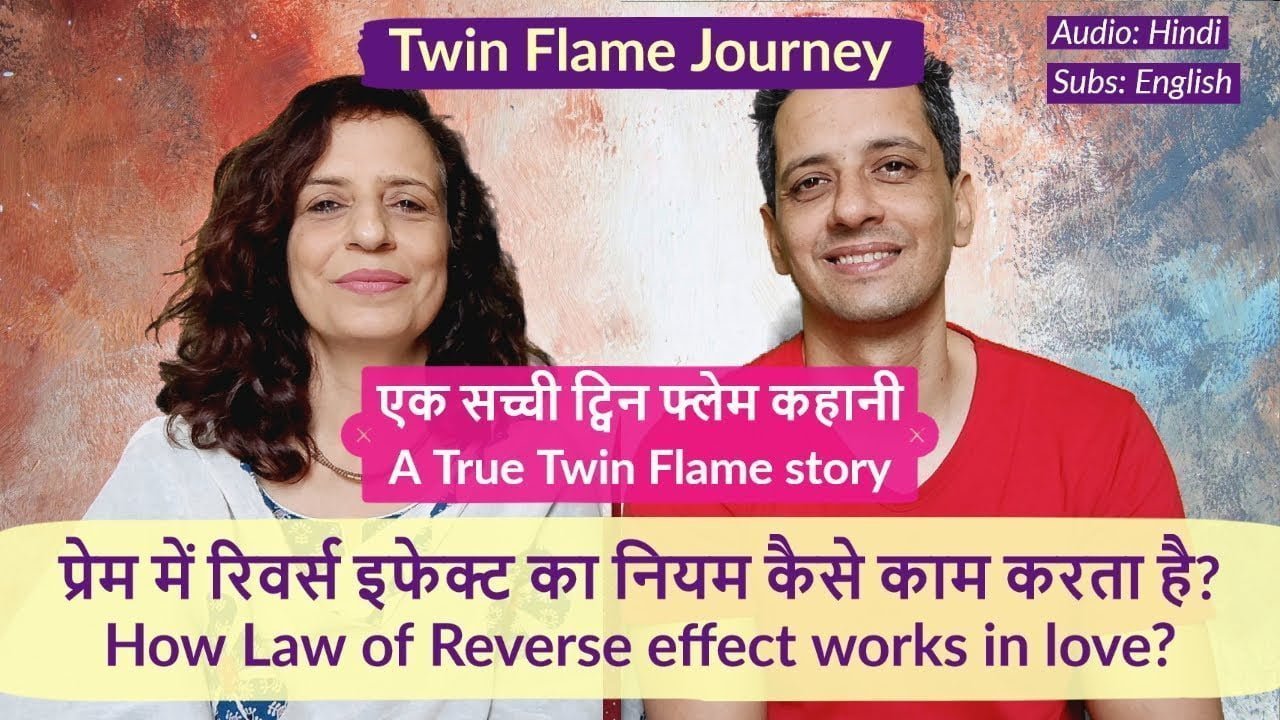 Why should we understand Law of Reverse effect?

A natural law of reverse effect exists in the energetic universe.

The law of reverse effect is some hard energy to change. It’s as automatic as gravity.

Understanding how reverse effect works in our psyche can help us understand our own issues that are really getting in the way of achieving our goal of reuniting with our twin flame.

In general, the law of reverse effect also leads to all our negative interactions with others.

Why its hard to let go twin flame?

1 Let’s say that you want to work on yourself and not to think about your twin flame. How easy is it to follow?

For most of us, it’s only a matter of time before we give in and try to connect with them by calling or messaging them or seeing their FB or Instagram profile.

And this time we even spend more time on them than we were doing, before we decided to stay away from them.

It becomes too hard to hold out against this craving to connect with them.

2 It’s a similar scenario with trying to stop smoking. What happens when a smoker tries to quit smoking?

Addiction is strong energy in motion. Try to stop its motion and it will boomerang back at you with the full power of its forward motion and that too in reverse.

This is why it’s so hard to stop any addiction.

And know that the one human being is biggest drug to other human being.

And we are talking about your twin flame, who is the most lovable person for you in the whole world.

What is Law of Reverse effect?

IF you want to know more about this couple then you can see video series, whose link is in cards above.

Tinku and Tina had to stay away from each other due to third party situation.

Although they were physically separated and had no direct means of communication, but Tinku was still energetically connected with Tina.

These posts were conveying a message that he still loves and cares for Tina.

His posts were creating lots of emotional turmoil in Tina as well. This is called Law of reverse effect, which means that the more Tinku was consciously trying to show his love to Tina, the more difficult it was becoming for them to reunite.

To summarize law of reverse effect briefly, it means that the harder one consciously tries to do something, the more difficult it is to succeed.

How do we get past the law of reverse effect?

So How Tinku overcame the law of reverse effect?

When all of this was going on, Tinku took a reading from Tarot card reader and he came to know that Tinku and Tina will reunite after 10 years.

This was a shock for Tinku, who was hoping to reunite in couple of months.

His spiritual master had already educated him that if Tinku is able to let go Tina in 3d Physical world and focus his energy on his inner work, then it will lead to faster reunion.

Astrology, Tarot reading and other kind of psychic readings, read our current energy and then predict one of the possible futures.

On the other hand, inner work changes our energy and thus can change our future.

With all this knowledge, Tinku’s intuition guided him to take a decision that he will not send his energy to Tina in the form of those social media posts or by any other means that will effect Tina in any way.

Tinku understood from this event that by making a small change in his behavior and energy, he was able to change the outcome of tarot reading and thus he can also change his future.

So in a way, Tinku was able to understand the Law of reverse effect and was also able to get past it.

How to not think about twin flame?

We know that its not easy to stop thinking about your twin flame.

Tinku used his energy to learn inner work and spent his energy in doing his practice regularly.

Know that it takes at least 21 days to replace a habit and it takes around 3 months to imbibe new habit in your being.

So Tinku continued his practice and during that time, some “stuff” came up that pushed him towards contacting his twin flame. He moved through this resistance.

Just trying harder to avoid twin flame without inner work will not help.

Tinku stayed away from twin flame by transmuting his energy towards inner work and learning higher spiritual sciences.

There will always be resistance when you start to do something that you were not doing earlier.

However, another law of the physical universe shows us that once we get started and are in motion , then there are higher chances that we stay in that motion.

So Once Tinku put inner work his priority, the Universe helped him to stay in motion.

The real problem is when we don’t take the first step.

Remember that taking first step is like winning half of the battle.

How to handle twin flame Journey?

Awareness and acceptance are the first key.

Inner work done by Tinku and guidance from his spiritual master, gave him awareness to accept his current challenge.

Certainly, understanding the Law of reverse effect in the first place helped him to avoid struggle and frustration.

When Tinku got prepared to take on Twin Flame inner work for reunion, it was something new for him.

He accepted it with all its challenges and this acceptance made this journey much easier for him to handle.

His teacher told him that many times he will fall during healing process, but he healed it and got back up.

He took two steps forward happily by healing himself and when the one-step-back occurred in form of worse trigger, he accepted it as the way things are and kept on moving ahead.

Step 2 : Do you really want to unite with twin flame?

Another key is that Tinku made sure that he really want to unite with Tina, despite the resistance from their previous partners.

Once Tina came in his life, there was no going back.

He understood that the attachments he have with his partner, children and other family members are just an illusion, which are stopping him in moving ahead towards harmony and reunion with his twin.

His desire was very strong and this desire helped him to cut through the resistance that his attachments were creating for him.

How much desire do you feel when you think about having a great life with your twin flame?

If you don’t want to do something then you may avoid it and put it off forever.

Tinku really wanted a certain outcome and the Universe then honored his intention and supported him because universe also wanted that Tinku and all twin flames should get out of the illusion and move ahead on their Divine purpose with their twin flames.

So Making a firm decision to reunite with his twin flame, helped him to move ahead.

Just the act of choosing to have your twin flame in life will puts you in forward motion.

The stronger the decision, the more the Universe supports you and the less you will experience that backlash. Conversely, the less certain you are, the greater the resistance will be.

Tinku and Tina, both were already suffering because of their attachments to others. Or we can also say that they were addicted to the presence of other humans in their lives.

When a smoker, chronic overeater or alcoholic finally comes to the point of certainty where he knows deep inside, irrevocably, that death will be the end product of this addiction, then he or she can change much easier.

Similarly, as Tinku stopped sending energy of desperation to Tina and instead trained and raised himself to be a Twin flame Coach, then Tina finally came to a point of certainty where she knew deep inside, irrevocably, that separation and disharmony in this relationship will be the end product of her attachment to others.

That was the moment that she decided to change.

When she took such a deep decision that it affected her soul, she invoked a state of grace.

A higher law took over and suddenly she was able to walk away from a life of attachments and then she never looked back.

Many of us need the help of a Higher Power to do this.

For a select few, it can happen from the realization and resulting decision alone.

For less extreme cases like Tinku, his planning to do inner work in a systematic way, like we teach to our students, and then sticking to that inner work, was able to get him through the backlash of resistance easily.

The slow, steady, persistent approach of a strong intention helped hold Tinku on course and moved him through the resistance much better, instead of the scenario where he was trying to force into reunion.

And his non awakened counterpart Tina was also awakened by the grace from Higher powers when Tinku reached a certain state in his spiritual growth.

What is meaning of let go?

Tinku’s life was also getting disturbed when struggling with separation and was sending his energy to Tina. He was not able to let go Tina.

His spiritual master recommended to let go Tina for now and wait patiently.

Tinku asked that is it alright to let go and not doing anything for Tina.

To this, his master replied that practicing patience is also a spiritual practice.

And masters did not recommend to do nothing, instead he recommended Tinku to keep on doing inner work and find the right way to unite with Tina.

When Tinku had let go Tina, he  automatically moved out of resistance and into the flow.

As Tinku’s peace was restored by staying away from Tina, he was able to concentrate more on his inner work and staying in higher vibration.

The more he stayed in higher vibration, the more faster he progressed on his inner work journey by learning and practicing new tools, and finally he was able to reduce the reunion time as predicted by Tarot card reading from 10 years to 2 years.

So, Last, but not least, knowing when to let go and when to hang on is a very valuable key.

Trying to Rigidly control is never the answer.

Letting go is not giving up or not doing anything or just sitting idle.

Letting go is an art, and a spiritual skill.

You just have to be smarter than the law of reverse effect.

Join our Telegram Channel to avail Free Healing Sessions and other notifications:

Consultation
By Appointment Only

We know all our healings, meditations, coaching, training etc. are very effectual, helpful and useful but we don’t advise or propose to replace the services of your doctor or traditional medicine and treatment. Nor do we take any responsibility for any risk involved or any loss if any. All responsibility is of the client and/or student.

Part of all fees and/ or donations received is used for social and spiritual welfare of human beings on behalf of Yogasth Foundation.

Join our Newsletter to get latest blog posts in your email